Skip to content
close
Today deal sale off 5% . End in . Hurry Up
close

About a year ago I placed a Dollar-Tree Solar Garden-Light, (Fig 3, below) in a sunny place of our yard. From a previously identical light I knew that the battery contacts were thinly plated steel which would corrode and cause lamp failure after a few months of exposure to the weather. Consequentially, for this lamp I sealed every opening, every crack and every screw with silicone rubber. To its credit it lasted almost a year before it died.

When I opened up the light to autopsy it I was surprised that the point of failure wasn’t the battery contacts. They looked pretty good with almost no corrosion. However, the entire interior was coated with a brownish powdery deposit (see Fig 1, below). The deposition source looked to be the AAA NiCd battery. Apparently it spewed out vapors which condensed on most the interior. The battery tests 100% non-conductive on a multimeter. It is truly dead.

I inserted an alkaline AAA battery into the Garden-Light but it refused to turn on. Apparently the NiCd battery’s fumes did more internal damage beyond looking ugly.

The Battery-University website says “Most rechargeable cells include a safety vent that releases excess pressure if incorrectly charged. The vent on a NiCd cell opens at 1,000–1,400kPa (150–200psi)…With each venting event some electrolyte escapes and the seal may begin to leak. The formation of a white powder at the vent opening makes this visible. Multiple venting eventually results in a dry-out condition.”

This certainly seems to be what happened in my Garden-Light. The only deviation being that the powder is brownish rather than white. This could possibly due to a chemical reaction with other components within the Garden-Light or possibly a unique Chinese chemical brew for the electrolyte?

The electronics in these Garden-Lights do have logic to prevent total discharge but have NO protection for over-charging nor does it limit the charging duration,  voltage or current. The solar cell on the light produces over 2V in bright sun. In other words, the Garden-Light is rather battery unfriendly when it comes to charging. I can certainly see the opportunity for overcharging on bright sunny days. Do this over and over during the summer and venting would be likely escalate until “poof” – dead light!

NiMH have a similar venting issue with improper charging so switching from NiCd to NiMH won’t help. Without proper charging control it would seem that a one dollar Solar Garden light is worth only what you paid for it. Consider it mild entertainment for a few months to a year, at most. 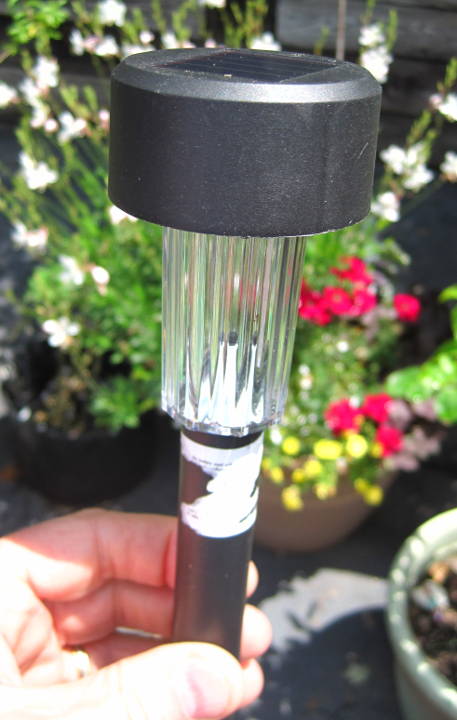 UPDATE: On January 18, 2020 Giovanni Bernardo made a blog post on the same subject. His post is in Italian but Chrome will translate (right-click) into English. See: https://www.settorezero.com/wordpress/teardown-lampada-solare-cinese-da-giardino/

The difference between HYSapientia Air Fryer Oven and other cookware

HYSapientia Amazon UK air fryer to be out of stock soon